What is an Income Statement?

The underpinning of a capitalist society and economy is that Business is undertaken with the need to generate a PROFIT.

Many users are interested in knowing how well a business has done over the past month, quarter or year and the Income Statement is the Financial Statement which reflects that.

The Income Statement reports a company's profits (or losses) over a certain time period and is therefore of extreme importance.

It does so by summarizing ALL the company Revenue that has been generated minus ALL the Expenses applicable to that period resulting in a Profit or a Loss.

Business profit is the residual amount that is left over after deducting the expenses from the revenue.

The Income Statement can be summarized easily using the following equation,

In it's purest form, the Income Statement would look like below.

However, Accountants add layers of information such as Gross Profit and Operating Profit in between which are helpful to the readers of an Income Statement and changes the above format a bit (There is more on this coming up).

Once you understand each individual part of the Income Statement, you will see how the pieces fit together as a whole which will help you read Income Statements by yourself in the future.

Why does the Income Statement Matter?

Breakdown of the Income Statement

In theory, the Income Statement is perhaps the easiest of the three Financial Statements to understand.

It simply comes down to the Income a business earns minus the expenses it pays to run the business.

If the money a Business makes (Income) exceeds the Expenses of the business during the Financial period under consideration, the company has made a Profit!

If the money a Business makes is not enough to meet the Expenses of the Business during the Financial Period- The company has made a Loss!

If you understand this point, you have understood the Income Statement.

Since the details of the Income and Expenses are important to stakeholders, accountants typically break these down further.

"Why are the details of Income and Expenses important?"

Because a break up of these items allow users to notice outliers and trends in Revenue and Expense Items.

For example, the owner might notice that the Utility Expenses have been disproportionately higher this year compared to the last and investigate that further saving him money.

Or, a manager may notice a trend of reduction in profits year on year and investigate that further.

You can see the snapshot of a typical Income Statement for a small business below.

Typically, there are three sources where a Company can earn money from

Sales is the primary source of money generated in a Business.

The term Revenue, Sales and Income are used interchangeably and refer to the total amount earned from the Business from all its income sources.

It is the money a business makes from it's core operations.

For Example, a Car Manufacturer selling a Car would be classified as a Sale in the Income Statement.

Sales are also referred to as 'Revenue' or 'Turnover'.

This is the income a company makes from activities that are not the main activities of the Business.

For Example, this could involve making interest income on deposits, renting out unused space etc.

Another way in which businesses make money is through Gains.

For Example, a gain may be due to the increase in value of a company asset or property.

They could also be made due to the settlement of a lawsuit.

Before a company can sell a product, it spends money on buying that product.

Cost of Goods Sold (or COGS for short) involves ALL the costs that a company undertakes to produce or purchase the goods that it sells.

The Gross Profit Line in the Income Statement is simply a calculation of the Revenue minus Cost of Goods Sold.

Basically, this number reflects the difference between what a company pays for the inventory and the price at which it sells its inventory.

Gross Profit is considered the preliminary or "first line" measure of profit before other expenses are taken into account.

Managers, Investors and other interested parties closely watch the trend in Gross Profit as it indicates the effectiveness of the companies pricing and purchasing policies.

Gross Profit is also often referred to as Gross Margin.

The selling, general and administrative expense (also known as SG&A) is comprised of all operating costs of a business that are not included in the cost of goods sold.

Interest Expenses and Finance Costs come after and are not included in the S, G and A Expenses.

It is upto the company management's discretion how much of the breakup of S, G & A they would like to give in the Income Statements.

S, G & A Costs can vary quite a bit from industry to industry and even from business to business.

Investors look to SG&A as a measure of how efficiently a company is using its money.

The Operating Profit may not be explicitly stated in the Income Statement but is often calculated by readers since it quantifies the profit generated from the CORE OPERATIONS of the business.

Everybody owes something to someone and companies are no different.

Interest Expenses is a non operating expense which arises from the borrowings of a company and could be from bonds, loans, overdraft facilities etc.

Readers of Financial Statements pay close attention to the debts on a business since the amount of interest expense has a direct bearing on company profitability.

The Tax Expense line in the Income Statement is the cumulative expenses that a company has paid to the federal, state and local governments.

Within the confines of the law, most companies use several accounting practices to minimize their tax burden and improve profits.

However, no one can completely escape the tax man and companies are no different.

Arguably, the most important number in the Income Statement - The Net Profit represents the net results after ALL expenses have been deducted from Revenue.

Often referred to as "the bottom line" - the Net Profit figure is closely watched and any major shifts in Net Profit are closely scrutinized by readers.

Net Profit does not mean Cash in the Bank!

Many people assume that Net Profit reported by a Business produces cash of the same amount but that's not the case.

The difference in Net Profit on the Income Statement and the actual Cash received by the Business arises for two reasons.

REASON # 1. Credit plays a very important role in the life of most businesses.

Due to Credit transactions being prevalent in many industries, most Businesses may sell a product or service now but take the cash for it later.

Similarly, businesses also utilize services and incur expenses now and pay for them later (think of an electricity bill as an example of a Business utilizing a service now and paying later).

Accountants have devised a system of Accounting called Accrual Accounting to measure the impact of such credit transactions on a Business.

REASON # 2. The Expenses listed on the Balance Sheet include Non Cash Expenses such as depreciation, amortization and other non cash adjustments which also reduce the Net Profit amount.

By now if your wondering, as a newbie to the accounting world - how in the world would you really (and easily) know the Cash coming and out of the Business ?

Accountants have us covered.

The Income Statement is a Financial Statement that summarizes the Revenue and Expenses of a Business during a particular period and shows if the Business has made a Profit or a Loss.

The Net Profit of a Business does not equal cash in the bank. This is mainly due to two reasons. The First being that most businesses follow what is called Accrual Accounting which is different from cash accounting.

The Second reason is that The Net Profit number is arrived at by deducting depreciation, amortization and other non cash adjustments which are all non cash expenses.

If you are new to accounting the next thing I would read about would be the Balance Sheet and the Cash Flow Statement.

If you want to learn accounting with a dash of humor and fun, check out our video course.

Take The INCOME STATEMENT CHALLENGE And CATAPULT Your Knowledge to the Next Level.

Get the Free E book! 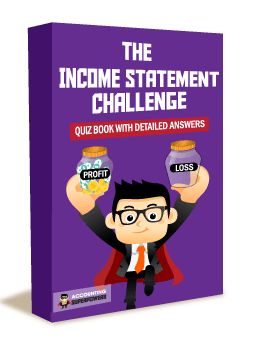